Yassas from Megalo Papingo, Greece! I am here for a month working with “White Pegasus”, which is a family-run horse farm with trail riding for tourists. I found them through HelpX, a site that pairs volunteers with people all over the world who need help with farms, teaching, or what have you.

The villages of Megalo Papingo and it’s sister village, Mikro (small) Papingo are far in the north of Greece, in an area called Zagori, known for its high, craggy mountains and subsequent inaccessibility. I have really gotten away from it all, but have found so much else.

To get here, I took a 6-hour bus ride from Athens to Ioannina, which is the closest city to Papingo (and still another hour away!). The ride itself was a beautiful tour of mainland Greece—we crawled up narrow roads along the very edge of the Western coast for a while, then headed inland through misty mountains. I had a two-hour wait in Ioannina for the farm owner’s sister to pick me up for the hour ride to Papingo—by this time it was pitch-black so I had no idea what surrounded me, other than an endless night and thousands of stars.

The next morning I got to sleep in (no horse duties the first morning), and awoke to find myself in this magical place.

The landscape is absolutely stunning and totally humbling in its ruggedness and scale. The air is crystal clear and quiet, except for the sounds of the bells from the goat and cow herds that move through the fields—they sound like far-off windchimes. There are even shepherds that tend to the herds—how romantic! Megalo Papingo has a permanent population of about 100, and Mikro Papingo has about 30. They are both tourist towns and I hear that the many inns and restaurants fill up on summer weekends and during Christmas. Otherwise, it’s almost a ghost town and you’re more likely to see a dog, cow, or horse in the street than a person. If you do see a horse, then it’s one of the ones I’m watching, and we have to check each day to make sure they don’t get into the playground and churchyard. 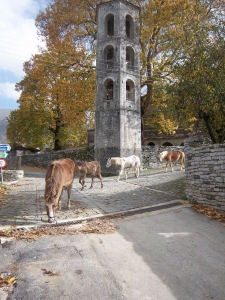 Leading the horses out of the churchyard 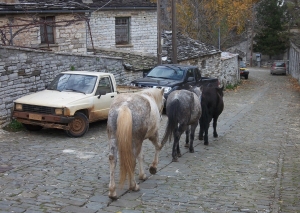 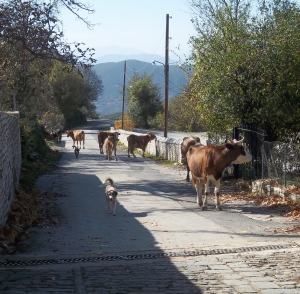 Cow herd with guard dog in the streets

This area is part of a national park and the villages are protected historic places, which means that new construction is restricted to stone buildings of no more than 2 stories, to fit in with the aesthetics of the older buildings. Most buildings are now inns or restaurants, with the odd gift shop or two, a church, school, and somewhere, a library.

One of the small streets of the village 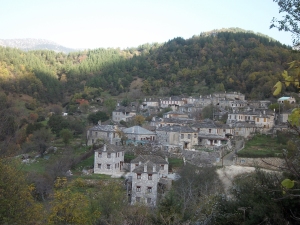 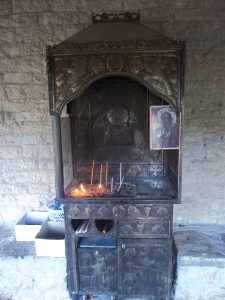 Altar outside of the church

The history of the area, from the little I’ve read, is fascinating—evidently the remoteness allowed the natives to resist the invading Turkish Ottomans for quite some time during the 15th century and even when finally conquered, they retained an impressive amount of autonomy. The resistance of the Zagori people was re-enacted during the Italian invasion of Greece by Mussolini during WWII. On October 28, 1940, Mussolini called the Greek president to threaten him with invasion and the president said only, “Ohi” (“No”), and hung up the phone. October 28 has since been celebrated as  “Ohi” Day. Unfortunately the “No” didn’t stop Mussolini, who attacked Northern Greece from Albania, but the Zagori area was hugely instrumental in holding off the invasion and forcing the Germans to split their forces and send troops to assist Italy in ultimately occupying Greece.   It’s been very interesting being in Greece after spending a month in Turkey..

Strange huge chess set in the middle of town

But nowadays the enemies in the mountains are wolves and bears, although I haven’t seen either….yet… 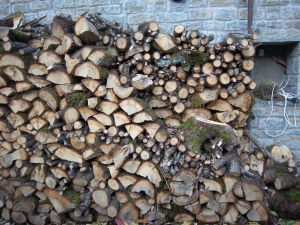 Now that it's cold, the smell of wood fires is everywhere..

I am staying at Kalliope, a hotel and taverna, which is owned by the grandmother of the husband of the woman who runs the horse outfit. 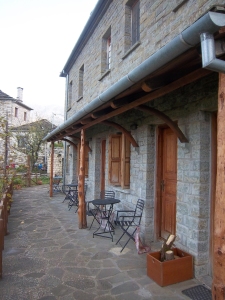 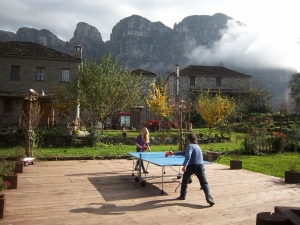 Sara (the other helper) and Costas (visiting photographer) playing pingpong in front of our rooms. What a view for a game!

My day here begins at 7:30am , when I get up to eat and get to  at the stables, with the other helper, Sara, who is from Norway. We halter and feed the horses and muck out the stalls and paddock and either let the horses go to roam the fields (by about 9am) or saddle them for a 10am trail ride, which lasts 45 min., and then release them. A few hours later we check on them to see where they are and to shoo them along if they’ve gotten into the playground or church in the village.

The view in the mornings--horses and dogs waiting for us...

Saddled and waiting for the riders

At 4:30-ish we bring them in for hay and grain and to be locked in the paddock for the night. Sometimes there is a 4pm ride, so we bring them in earlier. Now that sunset is early, we have begun additional night feedings at 8 or 9 pm. And the next day we do it all over again…

In addition to the 8 horses (the 2 foals were just taken to their new owners), there are two HUGE white Pyrenees dogs, a male, Araj, and female, Chawnee, who is pregnant. There are also many chickens, from whom we get eggs occasionally, and three hunting dogs (dad, mom, and baby). There is a garden with cabbages and a greenhouse for our veggies. 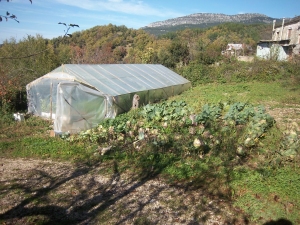 Garden and greenhouse where we get our veggies

My third day here a small TV crew came to film a ride, so there is a small chance that I could be on national Greek television in January! But I was pretty successful at staying out of the camera shots…