2nd fastforward: Behind the scenes of Art Intervention: Istanbul

Although most of you will have seen/heard about this via facebook or email, I’m going to give you a behind-the-scenes look into my event from last Sunday, which went so much better than I could have hoped for. For the “official” photos and videos, please visit: 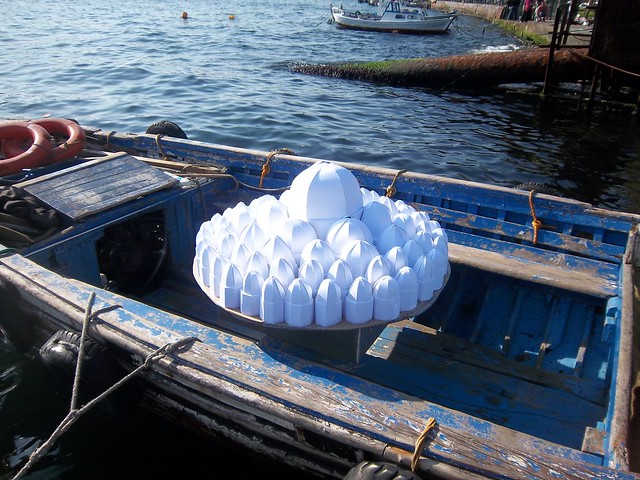 To begin with, it was a gorgeous day–bright and sunny. I assembled my piece on the ground floor of the residency with the help of three of the other artists working in the residency (thank goodness for assistants!) and had a lovely brunch with everyone, prepared by a local Turkish friend of the residency. Then it was down to the Halic! (Golden Horn)

The domes right outside the residency...

Surreal "fish eye" view of domes in our street. Julie is at the bottom with the bookcase.

Mettine, who was visiting from Amsterdam, and I carried the construction while Julie, one of the residency directors, brought a small bookcase on a hand truck to use to raise the construction a bit higher within the boat.

Processing to the harbor (I'm not at all as unhappy as I look!)

Once at the harbor we had to re-negotiate with the ferryman, who suddenly wanted to charge almost twice what we had agreed upon the day before.  That was really no surprise, and I was fortunate to have some native speakers to help me.  The price never went down, but I was just happy to get the piece into the boat.

And then it was off! One of the residency directors and a few of the other artists ran to take photos on the Galata bridge and the other side of the Halic, which was really helpful.

The Galata bridge is the main thoroughfare between Sultanahmet and Galata and is traversed by tens (or hundreds) of thousands of people everyday. It is also always lined with hobby fisherman, so I was happy to have a built-in audience for the event.  It felt great to give art away for free!

Past the fish restaurants…

and towards the bridge...

This part of the event went pretty quickly–it might have been an 8-minute trip, across the Halic and back, if even that.

After removing the piece from the boat, I decided to let it float in the water alone. I was worried about just setting it free in the water, so I attached it to a short bungee cord and hung onto it from the platform leading into the water.

After a few awkward and wet minutes holding onto the piece and trying to take photos, I was convinced by the audience to just let it go….

….which was exhilarating, despite my fear of either: a. causing a deadly boating accident (with my paper and cardboard sculpture, which is of course, ridiculous) b. getting arrested for causing a deadly boating accident, “trashing” the river, or even some kind of disrespect towards mosques. You can hear my nervous “Am I going to get arrested?” in one of the videos in my flickr page.  Classic Stephanie!!

But, truly, it felt wonderful to set the piece free and watch it interact with the river and city. It was actually very well-behaved and floated up the Halic, past the ferryboats and fisherman, not moving too far out into the river, but also not coming too close to the boats or shoreline. There were a few “bu ne?” (what’s that?) from the locals, but for the most part people seemed to take it as a regular event. A couple of fishermen got their lines tangled in it, but it just continued on its way…

We were all surprised by how long it stayed afloat and in perfect condition. We had thought we’d have to built a pontoon to float it in the river, but the cardboard and hot glue did the trick! After a while it started to peel apart and wilt, and that’s when the best part of the whole event happened: a Turkish boy swam out to it and tried to board it, but ended up capsizing it. I couldn’t have asked for better public interaction! What a wonderful example of the conquering spirit of the Turks! (and pre-teen boys in general…)

At that point it was really disintegrating, so we paid one of the boys, Sarkan, 5 lira to swim back out to bring the wreckage in. This was a bit more complicated than it looked and required a lot of helping hands.

During the trash retrieval a ferryman arrived and tried to dock where the boys were picking up the trash. He was a bit angry and asked who made all the trash, and they said they did! Way to take one for the team, Sarkan! After they brought in all the paper I tried to give him another 5 lira, but he protested–so polite! I insisted, of course, and then took the above photo of my conquerors/rescuers.

My poor piece was now just a soggy wet mess, so we bagged it and left it by the side of the road. Thus ended what turned out to be a spectacular event!

The carcass of my domes

But the fun was not over for the day. The Art Department Coordinator for Robert College, where I had recently given a presentation and conducted a workshop, attended the event with his wife and two adorable and incredibly articulate kids. We showed them around the residency, and then we were all treated to a foot-juggling demo by one of the directors of the residency. It was an incredible day!