Istanbul-Day 3–Life in the Harem

First, an update to my last post, now that I have one of traveling buddy’s pics (so I remember things I didn’t photograph). Most importantly, I met an Iraqi man on our Bosphorous cruise who was very enthusiastic about Bush for getting rid of Saddam. Allison took a stealth photo of us, but later the gentleman took a formal photo with me.

And a photo from our dinner overlooking Haghia Sophia:

On Monday, we, and what seemed like 400,000 other people, visited the Topkapi Palace, which dates back to 1453 and was used as the sultan’s residence until the 19th century. –Side note–1453, the year of the Ottoman (and Islamic) conquering of the city, is HUGE here–it’s on t-shirts, buildings, and in internet passcodes–it’s an important date.

Topkapi means cannon, I believe, and refers to the weapon that gave the Ottomans an edge over the defending Byzantines during the conquest in 1453. The palace is huge; it’s often compared to a college campus, which is apt. It’s also well-landscaped with many trees, which makes photographing it difficult.

Looking back through the main gate to the Blue Mosque beyond. One of the Sultan's signatures (tugras) is over the door)

Within the main courtyard

We started out in the Harem, which is an interesting maze of small to medium-sized rooms. “Harem” means “private”, and was, subsquently, the quarters for the royal family and their attendants (for a total of a few hundred!) The harem housed the concubines, eunuchs, the Valide Sultan (queen mother) and a larger room for the sultan. The concubines could only be non-Muslims, so were captured abroad as young girls and brought up in the palace.

Courtyard within the Harem--notice the decorative stone pathway 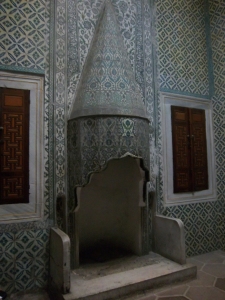 Beautiful shelves/cupboards within the bedrooms

View of a building from the Harem courtyard

Apartment of the Crown Prince

Dome within the Princes' apartment 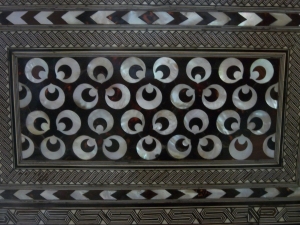 Example of mother-of-pearl inlay, in an Ottoman cintemani design

We then moved on to the Treasury, where photography is not allowed, probably to keep the enormous crowds moving. Despite the crush of people, they do keep the lines moving fairly quickly. We also entered the gorgeous Sacred Safekeeping Rooms (again, no photos), which include a clay imprint of Mohammed’s footprint and individual hairs of his beard contained in small glass vials. This place was truly mobbed, although I was impressed by the relative restraint of the people there, given the significance of the objects.

After 5 hours in the Topkapi we stumbled out for lunch and some much-needed Turkish coffee.

Then it was on to the Blue Mosque! This behemoth was built in just 10 years, from 1606 – 1616. There’s nothing like a dictatorship for gettin’ stuff done! 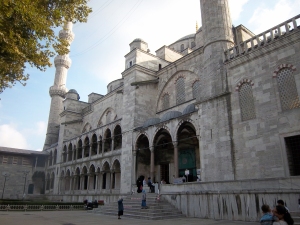 It’s hugely popular with tourists and locals, so much so that tourists must go through a side entrance.

Tourist entrance to the Blue Mosque

The interior is jaw-dropping. The space is truly enormous and despite the crowds, all you need to do to feel alone is look up. Unfortunately, this was the first mosque in which I clearly detected the odor of feet, but you get used to it. An unusual mix of the sacred and profane.

Kelli, aka "Jackie O", makes her appearance in the Blue Mosque 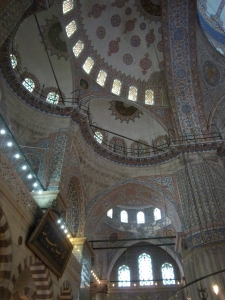 I love the collage of space and ornament

Young women waiting outside the mosque. Turkey is 98% Muslim, but there's a wide range of devoutness. It seems to be a pretty even split between women who wear a head scarf and those who don't--it largely depends on which part of the city you are in.

I may have my nights mixed up, but I think this is the night we had a light dinner and drinks at a fun nearby restaurant where the waiters gave two impromptu Kurdish dance performances. There was a lot of shoulder-shimmying, hi-fiving and fancy footwork. Those guys can move!