Finally, what you’ve all been waiting for—my first post on Istanbul! Needless to say, Turkey has been overwhelming (in a wonderful way), which is why this is over a week overdue.

Map of part of Istanbul. Sultanahmet is in the lower section, Beyoglu is in the upper section. The Golden Horn is the river running between them to the left. The Marmara sea is to the lower right, the Bosphorous the upper right.

I’ll start by saying that everyone should travel to Turkey if possible–it’s an amazing country–the history is fascinating, the food delicious, the people friendly, the landscape beautiful, and the architecture incredible. All very bland and over-used adjectives, I know, which is where the photos come in….

But, first, I have to go back and admit to something most of you who know me would think impossible…(big breath)  I missed my flight from Amsterdam to Turkey! Yes, it’s TRUE!! Oh, the SHAME! Unfortunately I was a victim of my own attempt at organization and misread my carefully-constructed itinerary, mistaking an 8:40 am flight later that week for (what was really) my 7:20 am flight to Turkey. So I ended up arriving at the airport with loyal friend Mettine just as my flight was taking off. AARRRGGHHH!!  But fortunately KLM had a flight to Istanbul just an hour later, so, after many Euros and much swearing and hand-wringing, I was finally Turkey-bound.

Fortunately, Istanbul is sunny, warm, and immediately exotic, so the extra Euros seemed a small price to pay once I arrived. I missed meeting up with my new travelling companions (old friend Allison and new friend Kelli) at the airport as planned, so I took a taxi to the hotel, which is in Sultanahmet, on the European side of the city. Allison and Kelli were out, so I enjoyed my first cup of Turkish tea on the hotel roof terrace overlooking the Marmara Sea: 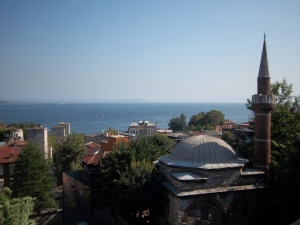 That evening, after reuniting at the hotel, Allison, Kelli and I  braved the maze that is Istanbul to attend an opening at my residency.  The residency is in Beyoglu, which is across the Golden Horn, and is known for its steep, narrow streets. After much searching (and more hand-wringing on my part) we finally found the residency.  It is quite impressive–the directors renovated an old building by hand (with much local help) and ended up with a beautiful 3-4 story space (more details later when I am actually living there) with exhibition and studio space, bedrooms, and a large roof terrace. The place was packed for the opening, which included a slideshow of the renovation, a dance performance and delicious pot-luck food. I met the residency directors and a faculty member at my graduate school who is in Istanbul with his wife on an artist’s Fulbright. It was my first night in Istanbul and I already felt connected!

The crowd overflow outside the residency building

Day two in Istanbul began with a tram ride to the harbor at Eminonu and a stroll through the Spice Bazaar–packed not only with spices, but also dried fruits, nuts, sweets and souvenir shops. It is colorful and crowded, and certainly spicy, but not quite as fragrant as we expected. Still, very interesting and a fun place to wander. The vendors are just as interesting as their goods–most know 3-4 languages, at least, and can probably make jokes in all of them. Their first question is always “Where are you from?” and it’s refreshing that their first few guesses are rarely the U.S., if only because it allows me to believe that the city is not overrun with American tourists. Tourists definitely crowd the city, but most seem to be European rather than American. A local tells me that there were few Americans a couple of years ago, but that the number has been increasing. But on to the photos of the Spice Bazaar!(which are a bit out of order): 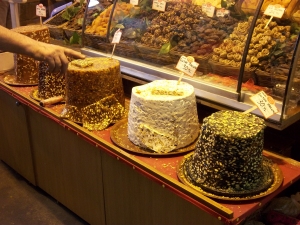 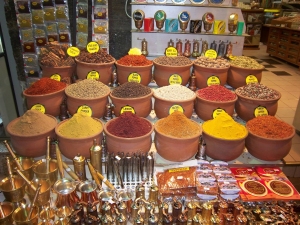 We had just about 30 min. in the Spice Bazaar before our main outing for the day, which was a cruise up the Bosphorous. The Bosphorous separates the European and Asian sides of Istanbul and is lined with monuments, palaces, mosques, a fortress or two, beautiful mansions, apartments, restaurants, and hotels, as well as more everyday houses and buildings as you head further north. The water isn’t known for its purity but is still a beautiful dark blue, and both shores are full of cypress trees so it feels very Mediterannean.  The cruise is about 1.5 hrs with a few stops on both sides of the river. During the cruise, waiters constantly circled through the boat selling cups of tea, coffee, sodas, and a circular sesame bread (simit). 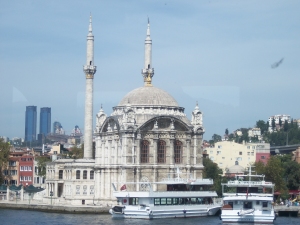 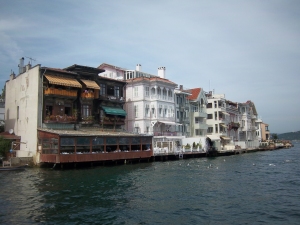 Kelli and Allison on the boat up the Bosphorous

We disembarked on the final stop of the cruise, at Anadolu Kavagi, which is on the Asian side. There we had lunch at one of the many shops cooking up fresh fish caught daily along the Bosphorous. As in the rest of Istanbul, stray cats are swarming everywhere and are either ignored by the locals, or treated to tidbits.

delicious, despite the bones!

Then it was a quick but very steep hike up to the Yoros Kalesi, a medieval castle built by the Byzantines and later renovated by the Genoese and Ottomans. There cozy restaurants and cafes along the way with beautiful views, and lots of signs pointing you to the castle. Unfortunately none of those signs tell you the castle is closed for renovation except the last one at the castle itself. But we did get some cool breezes and a view of the Black Sea once we reached the top.

View of from Asia across the Bosphorous to Europe, with central Istanbul in the distance 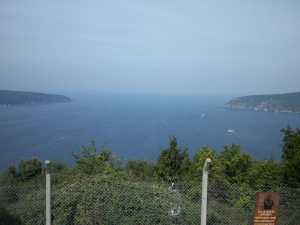 View of the opening to the Black Sea. Europe is on the left, Asia on the right. Notice the scary "off limits sign"

At the bottom of the hill we treated ourselves to some well-deserved ice-cream and quick naps on the boat-ride back to Istanbul. But where we done? NO! We pushed on to the “New Mosque”, or “Yeni Camii”, which is “new” at a bit over 400 years old (built 1597 – 1663) . The complex consists of a huge courtyard in front with a large fountain for ritual washing before entering the mosque–we generally only saw men using the fountains, although I don’t think there are restrictions on women using them***

***huge cultural/religious caveat–I have probably less than a basic understanding of Islam, as well as Turkish history, so please forgive any errors in my interpretation of what I see/experience.  I am using this trip to learn more about the religion and history–feel free to and send me a message if you can correct/enlighten me–stephanie@stephaniebeck.org*** 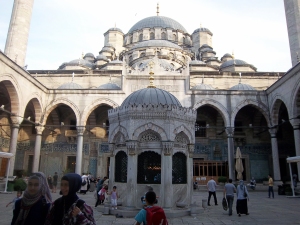 Courtyard of the "New Mosque"

Men washing at the fountain before entering the mosque

Crowds of people, tourists and locals, were streaming in and out, and we tried to copy the actions of the women entering the mosque but evidently missed a crucial step and were waved away with much strict (but not angry) Turkish by a man at the door. He tried to explain the procedure (in Turkish) and it took a few minutes for us to realize that in taking your shoes off, you have to step out of your shoes directly onto the carpet at the door–you can’t step out onto the ground next to your shoes since this dirties your feet. After retreating and trying again, we successfully entered the mosque. It was stunning.

Interior of the "New Mosque"

The sense of space and overwhelming amount of ornament in tile and paint is just breathtaking. It, and all of the mosques I’ve seen so far, had low-hanging iron lamps (now with energy-saving flourescent bulbs!) which breaks the space up a bit, but you still get a sense of the sheer enormity of open space above you. Men were actively praying in the large central area of the mosque (tourists are typically restricted to the back 1/3  or so of the mosque) and women were praying (and chatting) behind a screen at the back of the mosque. The division between the sexes is unsettling to me, although I was, of course, conceptually aware of it before my travels. Experiencing it on a daily basis, however, is a different thing.

Next to the mosque is the tomb of the “valide sultan” (mother of the sultan who often had enormous power) under whom the mosque was completed. 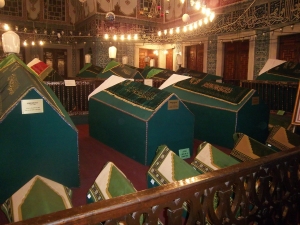 We then wandered through the back streets around the Spice Market which are bustling with their own stalls which cater more towards the locals. Our goal was the “hidden gem” of a mosque, the mosque of Rastam Pasa*

*I haven’t figured out how to include the correct diacritical marks in the Turkish alphabet, so many of the names I give are not technically correct.

The mosque is small and dark, but exquisite, and we had it all to ourselves for a bit. It also had a sign outside with the time for the next call to prayer and we decided to wait outside to see people attending the prayer. One man invited us in to watch the prayer, so we had a private viewing of 6 men praying in the mosque (we could see him tell the other men that we were watching–every once in a while someone would look over his shoulder at us) It was interesting to see–the up and down must keep you pretty limber–one gentleman was definitely elderly but seemed to have few problems performing the prayer. I have been struck by how welcoming, or at least tolerant, people are to having visitors in mosques, especially during prayer times.

Wandering the back streets of Sultanahmet 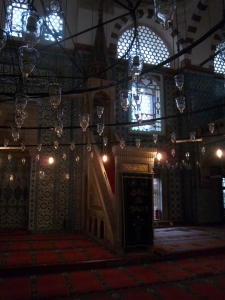 The day ended with a delicious dinner on the roof at Zinhan Kebap House at Stork’s, overlooking the Bosphorous. I had grilled haloumi cheese and veggies. mmmm!

ps. if anyone can give me pointers on how to deal with the text/image arrangement in wordpress it would be much appreciated. It’s driving me nuts!!! thanks!